As part efforts to ease the gridlock in Apapa Lagos, the State Government, under the administration of Babajide Sanwo-Olu, has donated additional 30 hectares of land in Ijora area.

Sanwo-Olu made this known on Sunday during a five-hour tour of projects and infrastructure being developed on the Apapa corridor.

He, however, expressed disapproval of the truck drivers’ action and the failure of the Nigerian Port Authority (NPA) to enforce extant regulations preventing trucks not yet approved for loading to park indiscriminately on the highways.

The Governor stressed the need to overhaul the terminal system at the ports, noting that there was no reason for the trucks to park on the highways if their dedicated terminals were operational.

He disclosed that the State Government had made a request to the Federal Government to prevail on the concessionaire that will be operating the 700-truck capacity Lilypond Terminal at Apapa to open the facility for use without further delay.

He said: “Today, I have taken time to personally inspect some projects being developed both by the Federal and State governments to improve traffic around Constain, Iganmu, Apapa and Mile areas. The projects are initiated specifically to address the chaos created mainly by indiscriminate parking of trailers along the routes. Already, there is an ongoing rehabilitation work on Marine Bridge, where a stretch has completely been scarified.

“There is also a Lilypond Terminal, a major holding bay for heavy-duty trucks, which has not been operated after it was transferred to a concessionaire. We are aware that the concessionaire is meant to complete an agreement with NPA on the transfer of the facility. But, while this is being done, the Lagos Government has donated 30 hectares of land in Ijora to raise the capacity of the Lilypond Terminal.

“These steps will be part of the solution of taking the trucks off the Apapa highways. When the rehabilitation work on Marine Bridge is completed in another four months, there will be improvement in journey time towards Apapa. We will also be having meeting with various stakeholders operating at the port, including the truck owners. The system needs a total overhaul. We need to agree and formalise the matrix of the trucks’ movement in and out of the port.”

The Governor also decried the failure of the truck drivers to make use of over 30 holding bays around the port area, including the 320-capacity Tin Can Transit Park.

He pointed out that the gridlock created by the indiscriminate parking of trailers had impacted negatively on the businesses environment on the axis, stressing that the menace had endangered the lives of people living on the corridor. 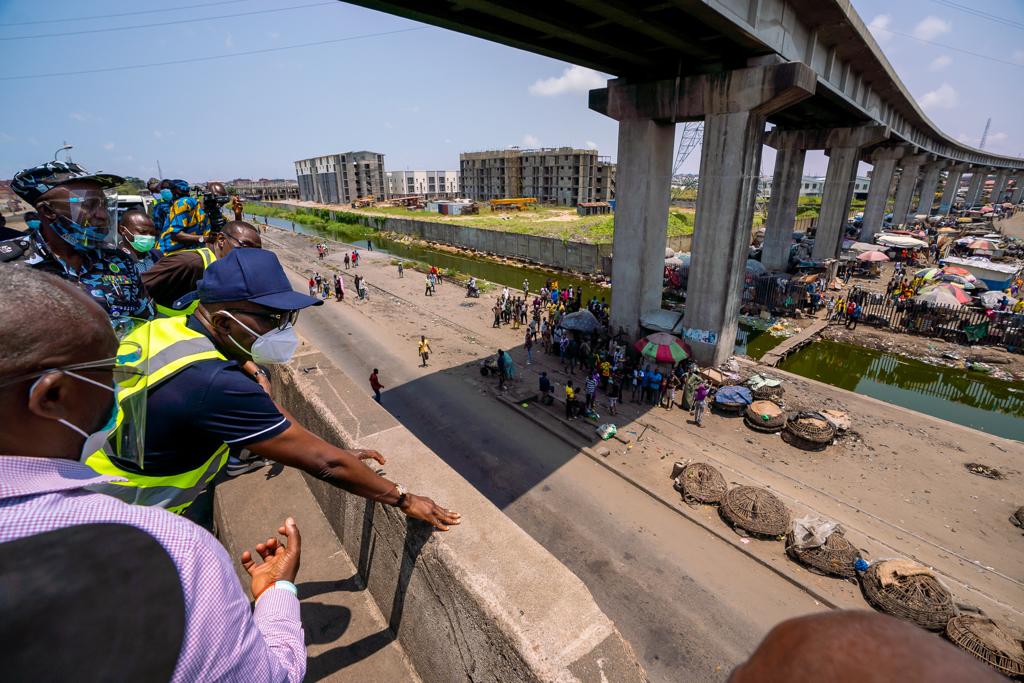 Sanwo-Olu observed that the volume of maritime business being carried out in Apapa and Tin Can Island ports had outgrown their capacities. He said the State Government had started building another port in Lekki in collaboration with the NPA to serve as alternative and ease the pressure on the two ports in Apapa.

The Governor admitted the Apapa needed a complete regeneration. The Government, he said, has responded the challenge with the re-construction work currently going on in the area.

He said: “We need to set out our activities in a methodical order and see how we redevelop Apapa. There is a massive road construction that is going on in Apapa and the work is extensive. We are using concrete for roads that are being rebuilt. Liverpool and Creek roads have already been completed. By October, all the road network leading in and out of the port area would been opened up for public use.

“My message to our citizens residing and working on this corridor is that, we have assessed the issues and we will be meeting with various operators and stakeholders. We will fashion out how we will all work collaboratively to bring about an efficient system that will deliver permanent solution and diffuse the gridlock. This, we hope, will bring life back to Apapa.”

The Governor moved to inspect a failed section of Mile 2 Interchange along Lagos-Badagry Expressway, where the State Government cleared 70 trucks of waste materials from the road drainage.

Sanwo-Olu promised that repair work would commence on Monday, but said the appealed to residents to desist from clogging the drainage with waste.

At the Costain Bridge being constructed by the Federal Government, the Governor said there would re-adjustment of the turning radius to alleviate the difficulty being experienced by motorists in negotiating the descending point of the bridge.

Sanwo-Olu also stopped at Iganmu intersection in Apapa-Iganmu area, where illegal settlements are springing up and encroaching the right-of-way of the Blue Line Rail project.

The Governor gave the slum occupants one month to remove their shanties and vacate the space.

He said: “The mess created under the Iganmu intersection has encroached the right-of-way of our rail project. In the next one month, we will be taking a decisive action to eject those creating illegal settlements under the bridge. We will give them notice of eviction and we will clean up the place. Once it is cleaned up, we will hand over space to corporate organisations to restore the aesthetic of the environment.”

The Governor also inspected the on-going repair work on the failed section of Eko Bridge. The repair is expected to complete by the end of September.

Post Views: 446
Help Aledeh News deliver the independent journalism Nigeria and the world need. Support us by making a contribution. Your donation allows Aledeh News to be completely independent. But it also means this online platform is only possible because of the support of readers like you. Support Now!
Share
Facebook Twitter LinkedIn WhatsApp Telegram Share via Email